The NCEM Young Composers Award 2015, presented in partnership with BBC Radio 3 and the internationally acclaimed Dunedin Consort, has been won by Joshua Urben (aged 16) in the 18 years and under category and by John Goldie-Scot (aged 25) in the 19 to 25 years category.

Joshua Urben’s Fractos Corde and John Goldie-Scot’s Why are you in such a hurry? will be premiered by the Dunedin Consort in Glasgow on Friday 2 October. This concert will be recorded for broadcast on BBC Radio 3’s Early Music Show at 2.00 pm on Sunday 1 November 2015. For more details see: www.bbc.co.uk/radio3/earlymusicshow

Young composers, resident in the UK, were invited to create new settings for a short dramatic scene from one of two Monteverdi masterpieces: Orfeo or Il combattimento di Tancredi e Clorinda. Students were provided with an English translation of the texts, which could be cut or adapted as appropriate. The new works had to be written for two or three singers, accompanied by a small ensemble of instruments, similar to those available to Monteverdi.

“It has been a privilege to have been part of such an extraordinarily rich and creative environment throughout the workshops and performances. To hear these young composers and players working together to create a reflection of the magic of Monteverdi from a 21st century perspective has been thoroughly inspiring and very enjoyable.”

“BBC Radio 3 has a strong commitment to supporting young talent, whether it be instrumentalists, singers, “free thinkers” or composers. As an organisation, we’re delighted to continue our involvement with the NCEM Young Composers Award, and have been hugely impressed by the standard of submissions we received this year.  The workshop today has been immensely enjoyable, and it has been a real pleasure to watch and hear the Dunedin Consort working closely with our shortlisted young composers.”

John Butt, Director of the Dunedin Consort concluded by saying:

“It has been a pleasure to spend the day with these fine young composers, all of whom show great promise for the future. The welcoming environment which the NCEM creates for this event and their enlightened approach to encouraging young composers to write for early instruments through this award is to be applauded. We look forward to polishing the winning pieces in preparation for their premiere later this year.”

The concert performance was streamed live and is available for one month from 14 May 2015 at: www.ncem.co.uk/composersaward2015

The National Centre for Early Music is administered by the York Early Music Foundation and funded by Arts Council England, Yorkshire. The NCEM has a thriving creative learning programme which includes the biennial International Young Artists Competition (July 2015) for emerging ensembles and a year-round music programme focusing on young people living in challenging circumstances across York and the Humber region. www.ncem.co.uk 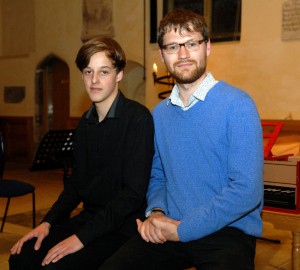 18 years and under category

The Latin title Fractos Corde translates as ‘heartbroken’, which emphasises the solemn storyline of Eurydice being dragged down to the underworld. A recurring theme dominates the first section of the piece, and the use of dialogue alternating between Orpheus and the Shepherd evokes the uncertainty of the situation. Following this, a romantic reminiscence of Eurydice is enhanced by the modulation to the major key, before an abrupt Presto-Agitato section. Sharp semiquavers build up the intensity and anticipation; then after the climax the music falls in consecutive diminished sevenths. Pathetic fallacy is used to enhance this dramatic scene, with piercing screams and shrieks of pain as Eurydice is dragged down to the underworld. After this dramatic whirlwind of emotions, the haunting theme returns in a recapitulation, with Orpheus mourning his loss and his pain. A last modulation to G major has a heavenly effect, with an alternation between G major and C minor, and a dynamic marking of pianissimo to ‘niente’ (nothing).

Joshua Urben is studying for his A levels (including Music) at Shoreham Academy in West Sussex. As well as studying advanced piano and clarinet, he sings in the Shoreham Oratorio Choir, recently performing Fauré’s Requiem and Handel’s Messiah. He has also attended the Sound and Music Summer School for young composers at the Purcell School, tutored by the composers Alison Cox and Kerry Andrews. He has had his work premiered in St Mary de Haura Church in New Shoreham and is currently working on a piano concerto and wind quintet. He hopes to study composition at a London conservatoire.

Why are you in such a hurry?

In this piece, the narrator (bass) tells the story of a fight between Clorinda (soprano) and Tancredi (tenor). The dramatisation of the text is brought to life by a combination of the intensity and syllabic nature of the vocal writing, along with the instrumental ‘accompaniment’.  Melisma is seldom used, as the inherent attack in setting music syllabically helps to drive the music and narrative forward, as well as likening it to a feisty ‘conversation’. Harmonically, the piece is never settled. For the most part, the harpsichord plays a continuo role, with spread chords imitating the realisation of figured bass, sometimes trying desperately to control the harmonic language in a world of tension. There are occasional moments of stability, primarily symbolising the rare stillness in the fight. Just as the narrator commentates on the battle, so the instrumental ensemble also reflects upon and comments on the confrontation.

John Goldie-Scot was born in Hampshire but spent his early childhood in Kenya and Uganda. In 1999 he moved to Scotland and in 2005 he was awarded a place at St Mary’s Music School in Edinburgh. While there, he won the Isobel Dunlop Prize for Composition, judged by James MacMillan. Following a BA in Music at the University of York, where he focused on composition (working mainly with Roger Marsh and Thomas Simaku), he went on to study for an MA in Composition at the Royal Academy of Music under Philip Cashian, passing with distinction. During his studies, he was awarded the prestigious Alan Bush Composition Prize for his piano quartet, PROCESSION, which was written for the Meridian Piano Quartet. Currently he teaches music at the South Devon Steiner School. His works include Long After I Am Dead …, for the Edinburgh Incidental Orchestra and Chorus, Für Henze und Felix for solo double bass, Estul for Academy Symphonic Wind and Experiment 3 (for microtonal oboe and Max/MSP) for Christopher Redgate. Forthcoming commissions include a work for Torbay Symphony Orchestra and an educational collaboration with the specialist ballet teacher and choreographer Jane Keenan.