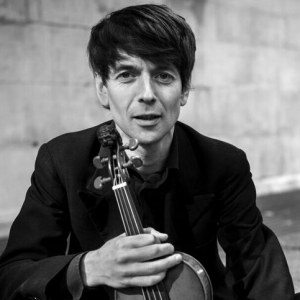 Dunedin Consort is delighted to announce the appointment of Matthew Truscott as its new leader with immediate effect. Matthew takes over from Cecilia Bernardini, who has led the ensemble since 2012 and now steps down to focus on a career closer to home.

Cecilia’s passionate playing and warm stage presence have been enjoyed by Dunedin Consort audiences the world over, and her enormous contribution to the ensemble’s growth and success cannot be overstated. Although we hope to welcome her back as a guest leader from time to time, her regular presence will of course be greatly missed.

‘It has been an absolute privilege to be the leader of the Dunedin Consort over the last eight years. It has shaped me in so many ways; of course musically, but also personally and on a human level. Scotland can be very proud of having produced a music group of this level; I am sure that, under John Butt’s ever inspiring direction and Matthew Truscott’s great leadership Dunedin will continue to flourish and thrive.’

Matthew Truscott will be a familiar face for many Dunedin Consort audiences, having guest-led the ensemble on many occasions over the years. Most recently, Matthew led Dunedin Consort at the 2019 BBC Proms, performing the complete Bach Orchestral Suites alongside new commissions by four contemporary composers. Indeed, he is widely respected as a versatile violinist, adept at both baroque and modern repertoire, and we look forward to working with him on a range of exciting new projects in the years to come. He has the respect and admiration of the whole ensemble, and we are honoured to welcome him as our new leader.

‘It is hugely exciting to be joining Dunedin Consort, a group which under the inspired direction of John Butt combines exuberance and scholarship with a wonderful sense of community and liberty. Especially at this time I relish the prospect of being part of such a special group of musicians. I am honoured to be taking over from Cecilia Bernardini, who with Dunedin has achieved so much during her tenure.’

‘Matthew is a player of rare expressive range, from the utmost sensitivity to the full fire of the virtuoso. But almost more importantly, he earns the respect of his team through the persuasive subtlety of his sound, in the very act of leadership. I am thrilled to welcome him to Dunedin Consort.’

Matthew joins us at the Wigmore Hall on 23 February for a live stream of Bach’s Brandenburg Concertos Nos. 4-6, as well later this season when we celebrate the group’s 25th birthday at concerts in Edinburgh, Glasgow and London. Dunedin Consort is committed to fulfilling its 25th anniversary season in its entirety and will present these performances online if circumstances prevent them taking place as live events.

The Dunedin Consort Guide to Opera • Episode 3
Scroll to top