What’s so special about Messiah ?

Ahead of our annual performances of Handel’s Messiah, we sat down with violinist Sarah Bevan-Baker to find out why Messiah with Dunedin never gets boring, even in sub-zero temperatures.

Tell us a bit about yourself. How did you get into playing the violin?

I was born in Aberdeen and grew up on the Black Isle and in Glasgow. My father was a composer and music teacher, so there was always music in the house. It seemed completely natural to take up an instrument — I’m one of five and we all played. There weren’t many opportunities for young musicians on the Black Isle in the seventies, so when we moved to Glasgow when I was fourteen, I felt as if a door onto a whole new world had opened!

What drew you towards the Baroque violin?

I studied violin at the Royal College of Music, but unfortunately it was a bit too soon to benefit from the huge revival in period instrument performance practice — Baroque violin was not on the menu! However, my violin teacher Frances Mason was Baroque-curious. She had a Baroque bow which she sometimes let me borrow if I was playing Bach and I loved it. It just felt ‘right’, as if the bow was showing me how to phrase and articulate.

I didn’t play on gut strings for another few years, until I borrowed a Baroque violin and bow and started playing on my own for fun. Again, I loved it and soon started playing in occasional concerts in Scotland. To be honest, there wasn’t much historically informed performance going on in Scotland at the time (early nineties), so it was exciting when Dunedin started using instrumentalists to put on an annual performance of Bach’s Matthew Passion.

How is Messiah to play as a string player — does Handel write effectively/idiomatically for instruments?

I love playing Messiah. Although it’s a tiring three-hour marathon of almost non-stop playing for the violins, it’s an immersive experience — a new journey every time, with different landmarks along the way. Doing it with the small forces of Dunedin is hard work, but it’s more intense and powerful than with a bigger group. For me it’s the difference between an intense jus and a plate of school gravy! Handel’s violin writing is very clever. Without doing anything especially harmonically startling, he somehow creates wonderful textures and colours, whether we’re depicting fluttering angel wings or flesh-destroying worms. 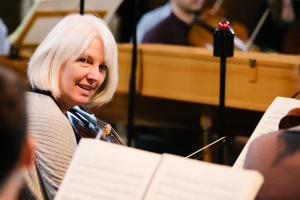 What’s your favourite bit of Messiah?

I couldn’t really single out one favourite bit of Messiah — in all honesty, I like different bits for different reasons.

The more athletic numbers such as the tenor aria ‘Thou shalt break them’ and ‘Why do the nations’ are thrilling to play, and who doesn’t feel a shiver down their spine in the Hallelujah chorus? But there are also moments of beauty and intimacy such as ‘I know that my redeemer liveth’ and ‘The people that walked in darkness’, which I find equally compelling.

What do you enjoy most about working with Dunedin Consort?

I always look forward to the now-annual Dunedin Messiahs. Over the years, I have enjoyed many wonderful, varied singers’ performances, as well as many varied venues. In some ways Messiah has become Dunedin’s calling card. The success of our recording winning a Gramophone Award (several years ago now) really helped to launch the group onto the international stage, and has taken us all over the world — from Belfast to Bremen to Bogota! However, I think we are all agreed that our Messiah in a big, draughty church in Kraków last Easter was our coldest concert ever. The organisers were handing out hand warmers as we we went onto the stage and one string player (who shall remain nameless; it wasn’t me) even had a hot water bottle up her dress!

Join Dunedin Consort for its celebrated annual Messiah at