After nearly 20 years of singing with Dunedin Consort, we are thrilled to welcome Nicholas Mulroy as our first-ever Associate Director. Nicholas has now directed the ensemble on several occasions, and his warmth, sensitivity and extraordinary musicality have fostered a natural and irresistible rapport with the musicians. It is our great pleasure to see his association with the group develop through this new appointment, and we look forward to many fruitful years ahead.

With his next appearance directing our a cappella choral ensemble in How Lonely Sits the City approaching in November, we caught up with Nicholas to ask him what it means to take on this new role. 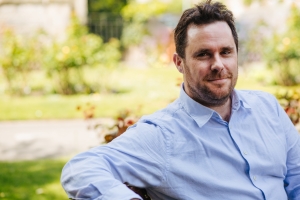 We are so pleased to welcome you as Dunedin Consort’s new Associate Director. What does it mean to you to take on this inaugural position?
Thanks! I’m pretty thrilled to be welcomed! I hope it’s a really exciting chance to develop the group’s work, especially in vocal music of various shapes and sizes. It looks back to the initial incarnation of the group, founded on the hard work of Susan Hamilton, Ben Parry and all who have followed, but also looks forward to developing the ways we connect with our audiences and the music we perform.

What is it that makes Dunedin Consort different from other groups?
I know I’m not alone amongst the musicians in feeling that coming to work with Dunedin is like being ‘at home’. It’s not only the sense of belonging that the group is so good at nurturing, both on and off stage, although that is important. It’s also the way that, for all the colourful characters (none more so than John!), and alongside all the imagination and innovation that goes into the conception and programming at all levels, it always feels like everyone is utterly devoted, in the moment, to the music: to making it speak most clearly, and connect most honestly, with the listeners. There’s an extraordinary balance of ego-free music-making in a collection of people who give so, so generously of themselves. 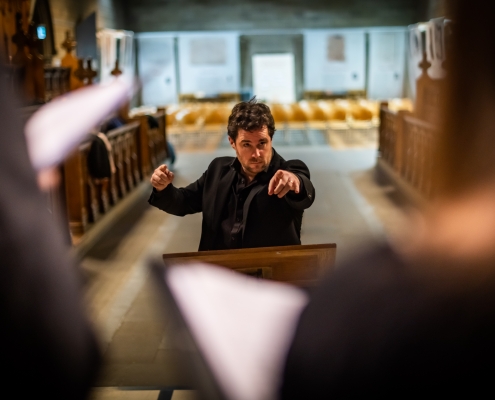 You have been an important part of Dunedin Consort for a long time. What are your earliest memories of performing with the group?
I first came up to Edinburgh in 2001 (I think) to do a choral programme of the music of James MacMillan, so the group was one of the first professional outfits I worked with. It’s never been anything other than a joy to come up and sing in Edinburgh.

Any favourite moments along the way?
These moments almost invariably sound less amusing than they were, but in that very first project I did, there was a white-knuckle start to one concert where we almost didn’t make it past bar one. The 17 performers outnumbered the audience (which included the composer), adding to the febrile atmosphere. There was also a Messiah in Versailles where several singers very nearly fell at the last fence, during the Amen chorus. I’m sure it’s just a coincidence that the one person common to both of these incidents was Matthew Brook — he’s not always as serious as he looks.

Tell us about your role as a director. Is this something that has always interested you?
I have to say it hasn’t always interested me. Over many (many!) years, I’ve had the great fortune of working with some absolutely top class directors and colleagues, and it’s only in the last few years that I’ve felt the conviction to apply what I’ve learned from watching them work, and to speak up a bit more. But the other thing is that really it’s only a natural extension of how the group works, where all the musicians are encouraged to contribute to the process. One of the huge strengths of the group is that whichever the formation of the group, the stage is filled with musicians utterly qualified to lead and that’s incredibly exciting to be a part of, and something I’m very keen to promote.

Does this new role mean we will see less of you as a soloist?
Well, I hope not!
[DC: definitely not!] 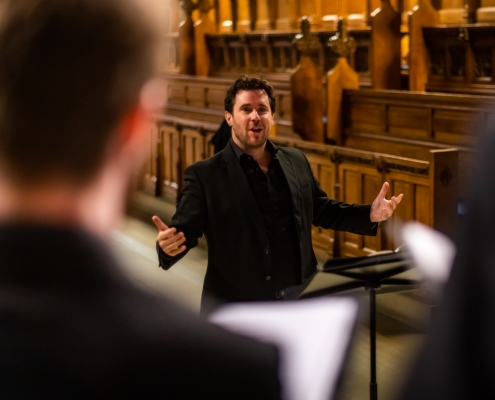 In several past Dunedin projects, you have directed and sung. For us mere mortals, the idea of directing and performing at the same time is a bit much to handle. How do you manage to juggle these two roles in concert?
It’s a challenge in some ways, of course, but the musicians here make fulfilling that sort of role much easier, and really the aim in both roles is essentially the same: we’re always just trying to hand ourselves over more completely to the music, trying to listen more generously, be more present for our colleagues onstage, and to present the music in the most truthful, open-hearted way we can.

What can we expect to see from you in this new role, and which projects are on your Wishlist?
Ooh, the Wishlist is quite long, and probably includes plenty already on the Dunedin repertoire list: early J.S. Bach and the music of his family, Purcell, Schütz… I love the music of the French Baroque — Rameau in particular, and his wonderful dance music. It would be great to explore more Monteverdi, and also I’d like carefully to investigate the possibility of incorporating other artistic disciplines alongside our music-making (without compromising the quality of what we do), but also venture into new work, and collaborate with other dynamic creative personalities. The goal in approaching our core repertoire is always to throw a bridge across time and make yesterday’s music resonate for us today — and I hope in that sense to assist with the continuation of this, building on the great work the group has already done.

• Watch Nicholas Mulroy in How Lonely Sits the City from Thursday 19 November at 7:30pm