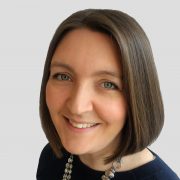 Jo joined Dunedin Consort as Head of Artistic Planning in January 2018 and quickly became a key part of the organisation’s senior management. She will be a familiar face for many of the group’s regular audience members and supporters, and is widely known both in Scotland and across the UK’s classical music sector.

‘I and my fellow Directors are very pleased to be making this appointment. We have seen at first hand, in Scotland, in London and on a number of engagements in Europe just how well Jo has managed the work of Dunedin, and we have full confidence that she will excel in the role of Chief Executive.

The programme for the year ahead, in Scotland and internationally, that Jo has helped to put together since she joined us, is varied and exciting and provides a brilliant start to her tenure. We look forward to supporting her and her colleagues, as well as all Dunedin’s family of excellent performers, as she takes the Consort’s work forward.’

‘Working with Dunedin Consort over the past year has been a hugely rewarding experience and an enormous pleasure. Few groups are as widely admired, or as warmly embraced, and it is a real honour to be given the opportunity to lead the organisation as it begins its next chapter.

Alfonso Leal del Ojo leaves behind him a thriving and vibrant ensemble at the peak of its powers, and I know that with this wonderful cast of musicians and John Butt’s unique artistic direction, we will go on to achieve still greater accolades in the years to come. With the support of the board, and with the backing of Dunedin Consort’s army of friends and supporters, I look forward to many more years of inspiring music-making – and to reaching many more listeners both at home in Scotland and across the world.’