As we celebrate Dunedin Consort’s 25th birthday this week, we have been asking some of those who have been involved with the group to share their memories from over the years. From favourite to funny, here are a few of their responses.

We’ll start with Ben Parry, who co-founded Dunedin Consort with Susan Hamilton in 1996. Among his top five memories was: ‘Bach St Matthew Passion — first annual performance in 1998 of Bach’s Passion in Greyfriars Kirk, Edinburgh supported by Dunard Fund.’ The first of many. Since 1998, Bach’s Matthew Passion has been performed by Dunedin Consort almost every year, making it a staple in the season programme. 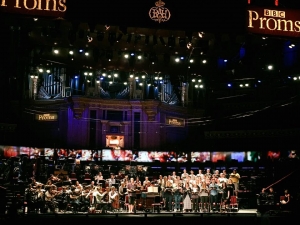 ‘Playing the John Passion at the Royal Albert Hall was memorable. I had never witnessed a Prom where it was so silent that you could actually hear a pin drop.’ Cecilia Bernardini

‘Dunedin’s first concert with an audience at Greyfriars during the pandemic, and the overwhelmingly powerful opening movement of that concert, the opening of Actus Tragicus.’ Huw Daniel

‘Some of our more far-flung concerts have been fascinating, such as trips to Mexico and Colombia. And virtually all European concerts are enjoyable, not just because of the places we visit but also because of the incredible enthusiasm of almost all the audiences.’ John Butt

Of course, the performances are only the tip of the iceberg. Here are some of our favourite behind-the-scenes stories!

‘En route to Weimar, we had a “driver, stop the bus” moment, to visit a roadside hostelry, and then an evening in the Weinstube of our hotel, a rather stylish place chosen by Alfonso (former CEO). A party of steins of beer and plates of sausages and sauerkraut.  The next day the musicians were in perfect form – steady as a rock — don’t know how they do it!’ Sir Muir Russell, former Chairman

‘When we were in Versailles for a Messiah performance; I managed to arrive almost an hour late at the first rehearsal because I had followed the signs of another chapel, thinking they were pointing to the Chapelle Royale. In a panic, I jumped on a little tourist train hoping that it could take me to the Chapelle across the gigantic gardens, faster than my own legs could.  But it still took ages as obviously it had to stop to show all the various touristic features. So in the end I got there, highly ashamed for my late arrival, only to discover that at that very moment they were rehearsing the chorus “all we, like sheep, have gone astray”. A text had never been so apt for that specific moment and situation.’ Cecilia Bernardini

‘I’m not sure it was all that funny at the time, but many years ago we gave a concert of Bach cantatas in the newly-built Perth Concert Hall.  While walking out on stage at the beginning of the concert I happened to tread on one of the plug socket covers, neatly severing the power cable for John’s chamber organ.  We had to do the first part of the concert without organ, which John took in his stride with characteristic aplomb.  I felt terrible at the time, but after somebody else did exactly the same thing about a year later, I noticed that the hall subsequently redesigned their socket covers!’ Jonathan Manson, Principal Cello 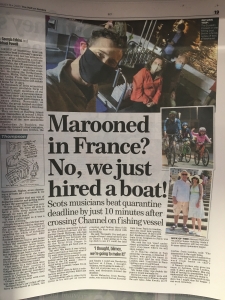 These stories would not be complete without this favourite amongst many. John Butt explains, ‘the trip back from France in a fishing vessel is doubtlessly the most obvious.’

‘An almost magical communal meal in France when all seemed “normal”, hours before the group was forced to make its dash back to the UK by boat to avoid Covid quarantine rules.” Katy Bircher, Principal Flute

Finally, Dunedin would not be here after 25 years were it not for the support of the audience. Here is a poignant and heart-warming memory from James Runcie, novelist and friend of Dunedin.

‘Music is nothing if it does not reach right into the heartstrings. My wife and I went to the performance of The Messiah at The Queens Hall in Edinburgh in 2019, just before the world closed in on itself. The music was rich and vivacious and celebratory and the trumpets did indeed sound. Yet this was also the last concert we went to before my wife died, and so it also felt like music for the end of time. I did not think I could ever hear it again. But then, two years later I went on a whim, just before the birth of a grandchild, to hear The Messiah once more, at The Wigmore Hall, in December 2021, and it was like hearing it for the first time all over again. It was fresh and immediate and glorious and I cannot think of another group of musicians who could produce such a soul-restoring performance. So thank-you, Dunedin Consort, for all your magnificence, and for being at the very heart of life-defining grief and joy — and beauty.’ James Runcie

Join us as we celebrate 25 years of Dunedin Consort at our anniversary concerts on the 18th and 19th March. Hear Purcell, Handel and Corelli, followed (at our Edinburgh event) by a glass of bubbly, cake and lots more fond memories.

Join Dunedin Consort for Welcome to all the Pleasures

The Trials of Love – BachTrack Review

Welcome to all the Pleasures – The Times Review
Scroll to top